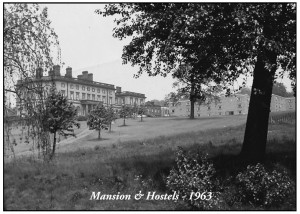 From 1960 to 1963 new buildings were erected to cater for an increase in the number of students on roll from 155 to 300.  This was in accordance with a government initiative of 1958, which had resolved that there be a nationwide expansion in the number of places available for students in Teacher Training Colleges.

The architect  (Derek Linstrum, F.R.I.B.A.)  considered that the greatest problem was the siting of the new residential accommodation for students, each having a bed-sitting room and joint use of bathrooms and utility rooms.  Eventually it was agreed that a number of blocks, each holding fifteen students, be erected in front of the main entrance to the Mansion.

A complicated arrangement of paved squares, lawns, alleys and flights of steps was built up around the hostels.

Linstrum felt that the finished result showed the influence of the layout of small Italian towns such as Frascati.

This page shows images of each of the student hostels at a time when they were inhabited,  their condition a few years after closure, and some images of demolition, which took place in 2017. 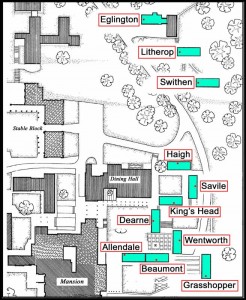 Carving on wall near Haigh

Pathway to the hillside.