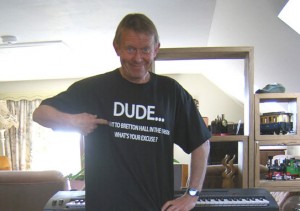 This was the first reunion to take place in the restaurant of the Sculpture Park and it was organised by myself, Alan Parker.  At this point, Kelly amos became involved and we discussed a plan for the future of the reunions.

Well, we didn’t set out to be a reunion for 1966 to 72, but that’s how it ended up, with ‘drop outs’ from other year groups because of their unease due to not knowing enough other former students.  Unfortunate, but that is how it was.  How to rectify this situation will now be up for discussion, or even, should we bother?  My opinion is still that we should be open to groups from all ages to be sustainable. Time is running out for us kids from the late 40’s and 50’s?

I’m back up in Tobermory again now, and trying to pull together the strands of the last reunion.  I think a resounding success, by all accounts, and certainly enjoyed by all.

The Friday night session in the Bull at Midgely was attended by about 20 people and a good evening was had by all.  I think that for those attending from a distance, this extra evening makes the journey a bit more worthwhile.  It also allows a bit of time to settle in after travel.  Anyway, this will be on the itinerary for next year.  So, 7pm in the Bull on the 13th May 2011!

On Saturday afternoon, the staff from the Sculpture Park took us around the exterior of some of the buildings, with discussions about the building’s futures.  They also took us into the Arts Education Archive, which it is hoped to develop over the next few years.  A fascinating collection of work from quite a large time scale.   Interestingly, an Alumni from 1958 to 61 was also meeting on that day, but just for a chat and a cuppa.  We invited them to join in on the afternoon session.  Hence, some rather older faces in the crowd (besides my own)  A visit was also made to Kennel Block, or the KB Bar as it was known as by later groups.   This area holds very fond memories for almost all of us.  It was here that we had our folk club and dances.  It was here that we formed relationships and sometimes succeeded, and other times not.  For me, the sound of ‘Jet Plane’ and a blond called Paula from another year group came to mind.  I was certainly not alone in contemplation of the past.  Enough of that stuff!

During the rest of the day, groups could be seen wandering around the lake, and sneaking past the security guards located around the Mansion.

The evening session started at 7 with drinks in the Sculpture Park Restaurant and the meal was served at 8.30.  We were pleased to see two of the staff attending, in particular, Dr Alyn Davies, the Principal of Bretton during our time, along with his wonderful wife.  They still look like we remember them.  How do they do that?

The meal was a ‘hot fork buffet’, but the best one that I have ever had.  No complaints there, apart from John Wood, who wanted a real pudding, not fresh fruit salad.  Well, there is always one, but I have to agree with him.  Next year we will fix that!   Whilst on the John Wood subject, one of the highlights of the evening was the after dinner ‘poetry’ by John.  A very interesting observation was to watch our attendees to see who got to the ‘punch line’ or the poem before John read it.  There really are some twisted minds out there!  John has published two books of his poetry, which I can thoroughly recommend, if, like me, you like a good laugh at the human condition (all bits of it).  I will try and find out where to buy the books from.  It is now compulsory that John attends next year’s event.

During the after meal session, Martin Snow handed out some very fine ‘T’ Shirts (modelled right)  and some very useful key rings made from Piano hammers.  Martin is a ‘top line’ piano restorer in Boston Mass.  Thanks Martin!  a great thought dude!  Come back again soon, and don’t forget the wife!  I won’t.  Musical interludes were provided by Rich Keys, John Stones, John Tudor, my pal Bob from Australia and myself.  The lack of a sound system will need to be addressed next year, as the acoustics were really difficult. John Stones has offered a small P.A. and mic next time.  If that fails, we will get a bigger system, and so on.  Hopefully also, some of the people who can perform and missed this year will attend.  No excuses next time Ric!

Finally, I forgot to do Wilde Mountain Tyme—so very sorry!  Jill Bury has the responsibility of reminding me!

Thanks to Moira Long and Dianne for their help in organising the event!

Hope to have others involved in the admin next time.  Hopefully, Sue Gidman (Batchelor), who was involved with the big reunion of 1988

If you have a further report to add to this, then please do so?

See you all next year!