The Reunion of 2012 was probably a turning point in the reunions, as we had started to get more interest from other year groups.

It was also a punctuation point in the passing of Alyn Davies.  Part of the afternoon session was dedicated to planting a tree for him in front of the temple in the upper lake area.   Alyn’s daughter planted the tree and Sue Gidman made a speech on behalf of us all.

The upper lake restoration was substantially funded from a donation from Alyn Davies and the Alumni.

The meal and get together in the evening went well, but a little subdued because of  thoughts for Alyn.

Next year’s event will probably be far more representative of other year groups.  I think that the 66-73 group has kept the Alumni meetings alive, but it is time to open the doors further. 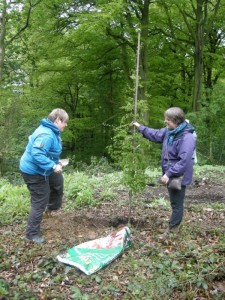 Planting of Tree in Honour of Alyn Davies