A Walk in the Park

Just an update about the meetup day at Bretton on Sunday 23rd May. We have had a medium response and I will not now be ‘Billy no mates’. Any Talbot has also been collecting names together

Quite a few people don’t really want to commit and coming along will be dependent on the weather and other circumstances.

Anyway, here are the people who will be there regardless.

Rachel Benaim i am from cohort 1992-1995. I studied english with drama and would like to meet but cannot really walk more than 100 yards as now have multiple sclerosis. Would happily sit in cafe.

The tricky bit is how to meet up without causing a crowd. I am suggesting the following:

I will stand outside of the main door to the Sculpture Park building at 10am, 12pm, and 2pm. I will take names and dates at Bretton for anyone interested. I will give my phone number out and also phone others if you leave yours.

I propose lunch at 12.30 for anyone up in the restaurant, so that we can organise meetups.

Don’t forget to book your car into the carpark!

I’m the one in the middle and Andy Talbot is pictured right. 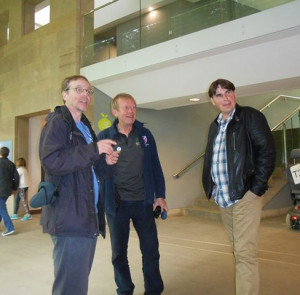